A remarkable feature of North African rock art is the existence of numerous engraved or painted inscriptions which can be found throughout the Sahara Desert. These inscriptions, generically named Libyco-Berber, are found from the west of Egypt to the Canary Islands and from the Mediterranean Sea to the Sahel countries to the south. Together with Egyptian hieroglyphs, they show us one of the earliest written languages in Africa and represent a most interesting and challenging topic in North African history. They appear in two different formats: engraved on stelae (mainly on the Mediterranean coast and its hinterland) or on rock faces, either isolated or alongside rock art paintings or engravings of the later periods of rock art. 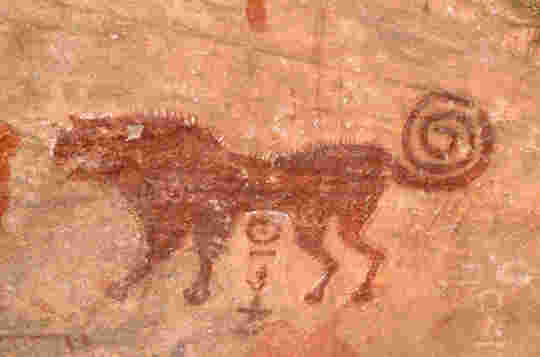 View of red wolf or lion with an spiral tail. A Libyco-Berber script has been written under the belly, and another one can be seen to the lower left of the photograph. Tin Aboteka, Tassili n'Ajjer, Algeria. 2013,2034.4200 ©TARA/David Coulson

Libyco-Berber characters were identified as written language as early as the 17th century, when some inscriptions in the language were documented in the Roman city of Dougga (Tunisia). They were deciphered by F. de Saulcy in 1843 through the comparison of personal names with equivalent Punic names in bilingual scenes, although a few characters still remain uncertain. Since the beginning of the 19th century onwards many different proposals have been made to explain the origin, expansion and translation of these alphabets. There are three main explanations of its origin - the most accepted theory considers that the Libyco-Berber alphabet and principles of writing were borrowed from the Phoenician script, with other symbols added locally. 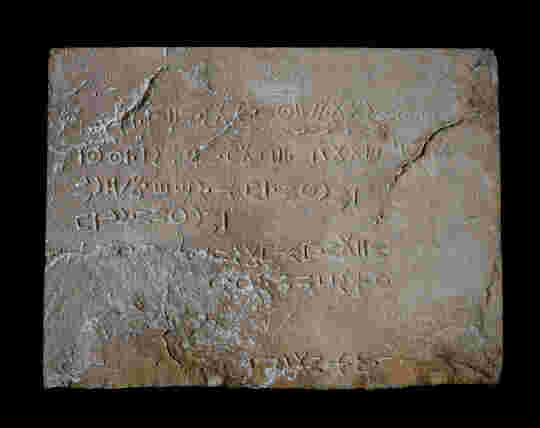 Half of a bilingual inscription written in Numidian, part of a monument dedicated to Ateban, a Numidian prince. Numidian is one of the languages written in Libyco-Berber alphabets. 1852,0305.1 ©Trustees of the British Museum

A second, recent proposal has defended an indigenous (autochthonous) origin deriving from a stock of ancient signs –tribal tattoos, marks of ownership, or even geometric rock art- which could have resulted in the creation of the alphabet. Finally, a mixture of both theories accepts the borrowing of the idea of script and some Phoenician signs, which would be complemented with indigenous symbols. Although none of these theories can be fully accepted or refuted at the present moment, the proposal of a Phoenician borrowing has a wider support among linguistics and archaeologists. 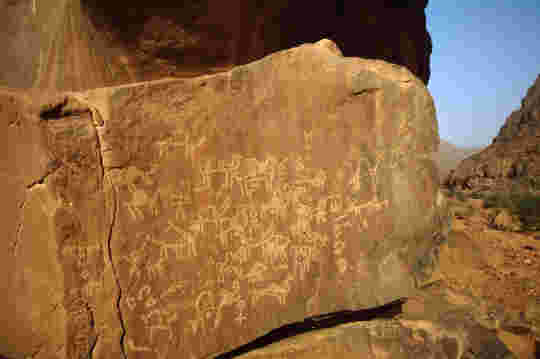 How is the Libyco-Berber alphabet composed? In fact, we should talk about Libyco-Berber alphabets, as one of the main characteristics of these scripts is their variety. In the mid-20th century, two main groups (eastern and western) were proposed, but this division is not so evident, and some studies have identified up to 25 different groups (grouped in 5 major families); some of them show strong similarities while between others up to half of the alphabetic symbols may be different. However, all these variants share common features: Libyco-Berber alphabetic symbols tend to be geometric, consisting of straight lines, circles and dots combined in different ways. 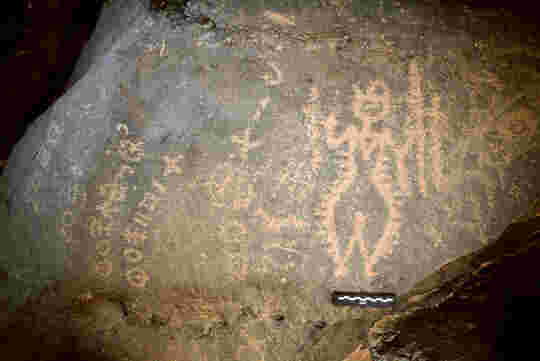 The study of Libyco-Berber script faces some huge challenges. In addition to its aforementioned variability, it is necessary to differentiate the ancient languages spoken and written in North Africa during the Classical Antiquity for which a generic term of Libyco-Berber is used. Furthermore, Tifinagh script, the modern script of Tuareg people shares some symbols with the Libyco-Berber alphabet, but otherwise is a quite different language. Contemporary Tuareg cannot understand the old Libyco-Berber inscriptions although they recognize some symbols. Chronology represents another challenge: although the first dated inscription on a stela is from 138 BC, some pottery sherds with Libyco-Berber symbols could date from the 3rd century BC. For some researchers the oldest date (as old as the 7th century BC) is believed to correspond to an engraving located in the Moroccan High Atlas, although that theory is still under discussion. Finally, the characteristics of the scripts present some problems: they are usually short, repetitive and in many cases incomplete. Moreover, Libyco-Berber can be written in different directions (from right to left, bottom to top), complicating the identification, transcription and translation of the inscriptions. 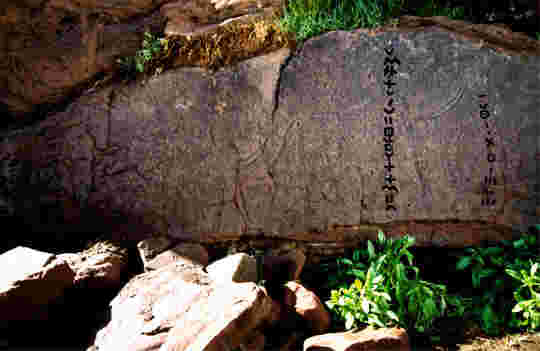 Panel with elephants and human figures superimposed by two Libyco-Berber inscriptions, which some consider one of the oldest written in this alphabet, enhanced for a better view of the symbols. Oukaïmeden, Morocco. 2013,2034.5878 ©TARA/David Coulson

Considering all these problems, what do we know about Libyco-Berber scripts? First of all, they normally used only consonants, although due to the influence of Punic (the language used in areas controlled or influenced by Carthage) and Latin, vowels were added in some alphabet variants. The translation of Libyco-Berber scripts is complicated, since the existing texts are very short and can only be translated through comparison with equivalent texts in Punic or Latin. Most of the translated scripts are very simple and correspond to personal and site names, or fixed formulations as “X son of Y”, characteristics of funerary epigraphy, or others such as, “It’s me, X”. Perhaps surprisingly, some of the translated inscriptions have an amorous meaning, with expressions as “I, X, love Y”. As the known Libyco-Berber corpus of inscriptions grows, it seems possible that more and more inscriptions will be translated, leading to a better understanding of the languages. 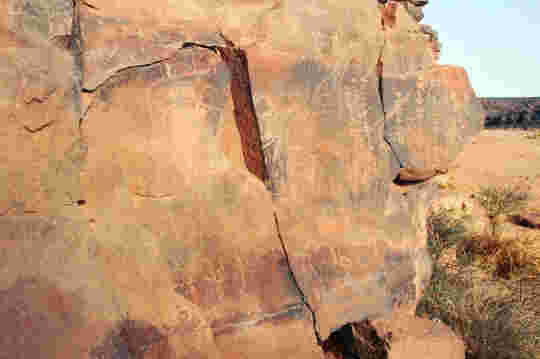 Of course, the Libyco-Berber scripts evolved through time, although discussion is still going on about the chronologies and rhythms of this process. After the adoption and development of the alphabet, the Libyco-Berber reached a consideration of “official language” in the Numidian kingdom, which flourished in the north-western coast of Africa during the two latest centuries BC. The kingdom was highly influenced by Carthage and Rome, resulting in the existence of bilingual inscriptions that were the key to the translation of Libyco-Berber scripts. After Roman conquest, Libyco-Berber was progressively abandoned as a written language in the area, but inscriptions in the Sahara were still common until an unknown moment in the first millennium BC (the scripts sometimes receiving the name of Tifinagh). The Berber language, however, has been preserved and a new alphabet was developed in the 1960s to be used by Berber people. 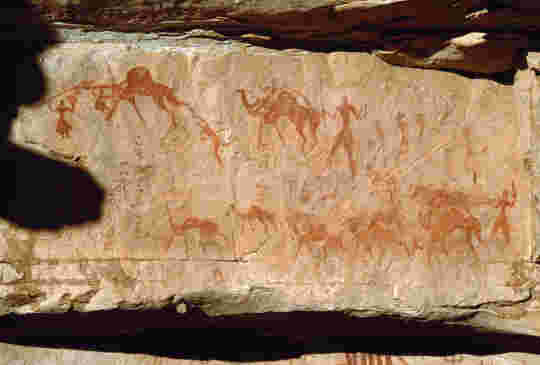 The many challenges that surround the study of Libyco-Berber scripts have led to a complex crossroads of terms, chronologies and theories which sometimes are contradictory and confusing. For the Rock Art Image Project, a decision had to be made to define the painted or engraved scripts in the collection and the chosen term was Libyco-Berber, as most of the images are associated with paintings of the Horse and Camel periods and thus considered to be up to 3,000 years old. Using the term Tifinagh could lead to misunderstandings with more modern scripts and the alphabet currently used by Berber peoples throughout North Africa. 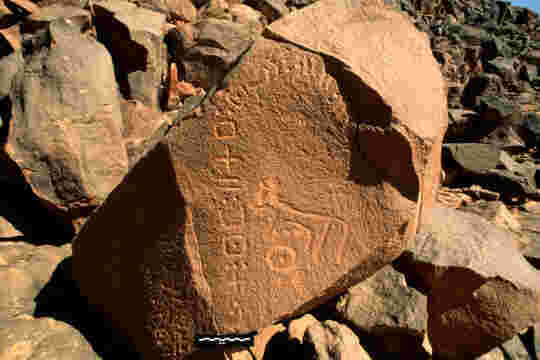 Undoubtedly, the deciphering of forgotten languages captures the imagination and is one of the most exciting challenges in the study of ancient cultures. However, it is usually a difficult enterprise, as extraordinary finds which aid translation such as the Rosetta Stone are fairly exceptional and most of the time the transcription and translation of these languages is a long and difficult process in which the meaning of words and grammar rules is slowly unravelled. Although there are no shortcuts to this method, there are some initiatives that help to ease the task. One of them is making available catalogues of high quality images of inscriptions which can be studied and analysed by specialists. In that sense, the Libyco-Berber inscriptions present in the Rock Art Image Project catalogue can be truly helpful for all those interested in one of the most fascinating languages in the world; a language, which albeit modified has endured in different forms for hundreds of years.