Historically, much of the rock art from across northern Africa has been classified according to a particular style or ‘school’ of depictions. One such category of images, known as the Libyan Warrior School or Libyan Warrior style is found predominantly in Niger. Typically, this style

“…commonly depicts human figures, mainly armed warriors; women are very rare. The style is fairly crude and the technique unsophisticated, almost invariably a rather careless pecking. The figures, almost always presented frontally with their heads quite circular, with added lobes, or mushroom-shaped, are shown according to a symmetrical schema. Various garment decorations and feathers in the hair are common, and the warrior often holds one or two throwing-spears – the bow is almost lacking – and frequently also holds by the leading rein a typical horse; foreshortened with large hindquarters” (Muzzolini, 2001:614)

Termed Libyan Warriors by French ethnographer Henri Lhote, these representations have been associated with Garamantes’ raids, possibly 2,500 years ago. Thought to be descended from Berbers and Saharan pastoralists who settled in central Libya from around 1500 BC, the Garamantes developed a thriving urban centre, with flourishing trade networks from Libya to Niger. In contrast, Francis Rodd, a military man who led two big expeditions to the Sahara in the 1920s, proposed that these figures represent Tuareg; a people reputedly of Berber descent who live a nomadic pastoralist lifestyle. They have their own script known as Tifinagh, which is thought to have Libyan roots and which is engraved onto rocks alongside other rock art depictions. 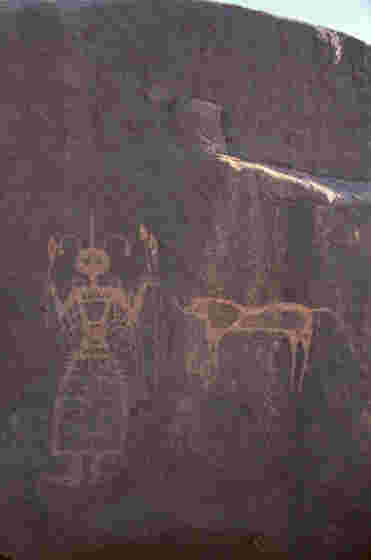 Libyan Warrior figures are almost exclusively located in the Aïr Mountains of Niger although can also be found in the Adrar des Iforas, north-east Mali extending into Algeria. Defining the Libyan Warrior Period chronologically is a challenge and dates are fairly fluid; the earliest dates suggested start from 5,200 years ago; it certainly coincides with the Horse period between 3,000-2,000 years ago but has also been proposed to continue throughout the Camel Period, from 2,000 years ago to present.

From the sample of images we have as part of this collection it is clear that not all figures designated as falling under the umbrella term of Libyan Warrior style all share the same characteristics; there are similarities, differences and adjacencies even between what we may term a ‘typical’ representation. Of course, if these images span a period of 5,000 years then this may account for the variability in the depictions. 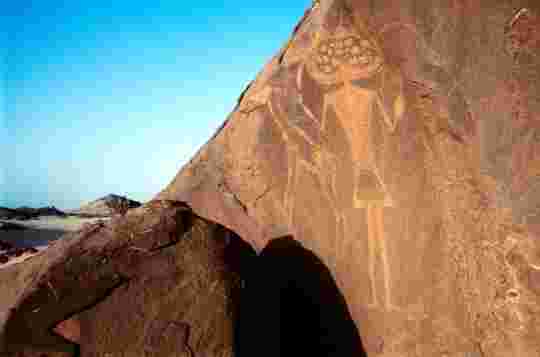 However, for the majority of figures their posture is remarkably similar even though objects of material culture and the types of garments they wear may show more diversity. The overriding feature is that figures are positioned frontally with arms bent and raised, often displaying splayed fingers. In some cases figures hold weapons and shields, but some do not. Some wear obviously elaborate headdresses, but in others the features look more coiffure-like. Selected garments are decorated with geometric patterns, others are plain; not all wear items of personal ornamentation. Certainly, not all figures are associated with horses, as typically characterised. Moreover, rather than all being described as unsophisticated or careless, many are executed showing great technique and skill. So how do we start to make sense of this contradiction between consistency and variation? 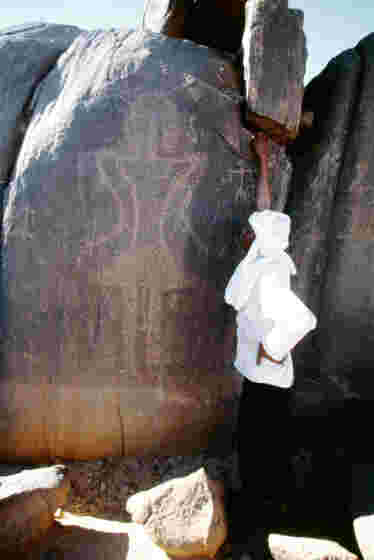 A criticism of Saharan rock art research, in comparison to that which has focused on other parts of Africa, is an under-theorisation of how the art links to past ethnic, archaeological or other identities (Smith,2013:156). This is tricky when dealing with past societies which were potentially nomadic, and where their archaeological remains are scarce. However, recent anthropological research may inform our thinking in this area. A member of the Wodaabe cultural group (nomadic cattle-herders and traders in the Sahel) on seeing a photograph of a Libyan-Warrior engraving and noting the dress and earrings told photographer Carol Beckwith that it represents a woman performing a traditional greeting dance with arms outstretched and about to clap (Coulson and Campbell,2001:210). 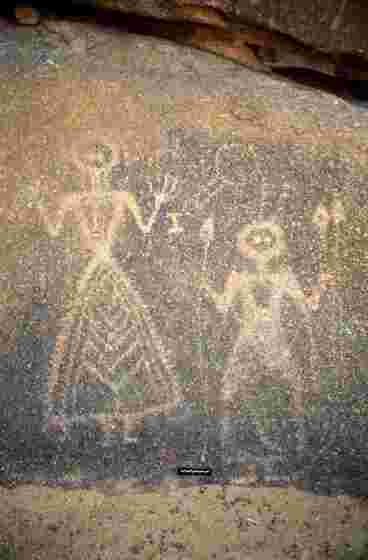 Such a comment suggests that local ethnographies might assist in an understanding of more recent rock art, that not all figures described as Libyan-Warrior may necessarily be the same, and indeed that women may not be as rare as previously documented. In fact, the Wodaabe have been noted to resemble figures in other Saharan rock art contexts (see article on Hairdressing in the Acacus).

If we accept that some of these representations share affinities with the Wodaabe then thinking about this category of images from an ethnographic perspective may prove productive. Moreover, the British Museum’s existing ethnographic collections are simultaneously a useful resource by which we can potentially add more meaning to the rock art images.

The Wodaabe belong to the Fulani people, numbering 20 million and currently living across eighteen countries. The Wodaabe comprise 2-3% of the Fulani cultural group, still live as true nomads and are considered to have the most traditional culture of all the Fulani (Bovin,2001:13). 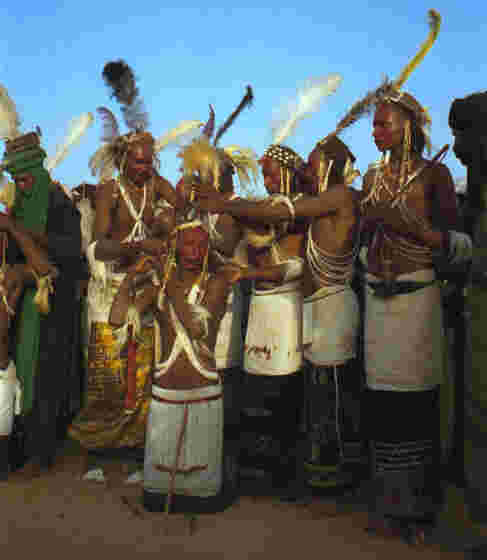 The Wodaabe have become particularly well-known in the West through visual anthropology, because of their emphasis on cultivating male personal beauty and adornment. Men invest enormous amounts of time in personal artistic expression; much more so than women. Anthropologists have documented the constant checking of Wodaabe men in their mirrors; a Wodaabe man will not even go out among the cows in the morning until he has checked and tidied himself. They spend hours every day on their appearance and have been described as styling themselves like “living paintings” and “living statues” (Bovin, 2001:72). Symmetry plays a particularly significant part in Wodaabe culture and is reflected in all their artistic expressions. Symmetry stands for culture, asymmetry stands for nature. Culture is order and nature is disorder (Bovin,2001:17). Everyday Wodaabe life is imbued with artistic expression, whereby “every individual is an active creator, decorator and performer (Bovin, 2001:15).

So, how might we see Wodaabe cultural traits reflected in the Libyan-Warrior figures?

Plumage is often depicted on these Warrior figures and for the most part is assumed to simply be part of the warrior regalia. The ostrich feather, a phallic symbol in Wodaabe culture, is an important element in male adornment and is carefully placed in the axis of symmetry in the middle of a man’s turban, worn during dancing ceremonies (Bovin, 2001:41). Music and dancing are typical of Fulani traditions, characterized by group singing and accompanied by clapping, stomping and bells. The feathers in the British Museum’s collections are known to be dance ornaments, worn during particular ceremonies. 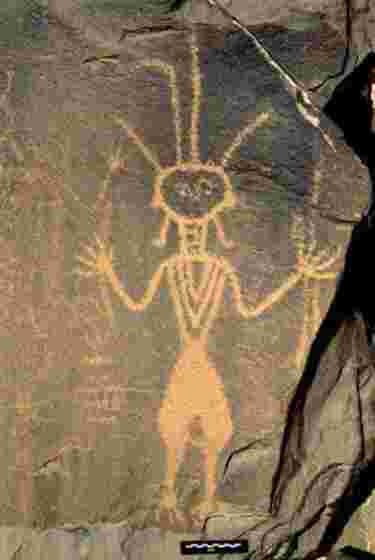 One of the recurring features of the Warrior engravings is the round discs that seem to be suspended from a figure’s arm or shoulder. Historically, these have been interpreted as shields, which one might expect a warrior to be carrying and in part this may be the case. 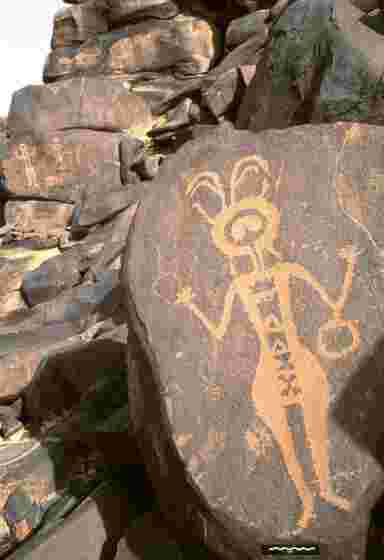 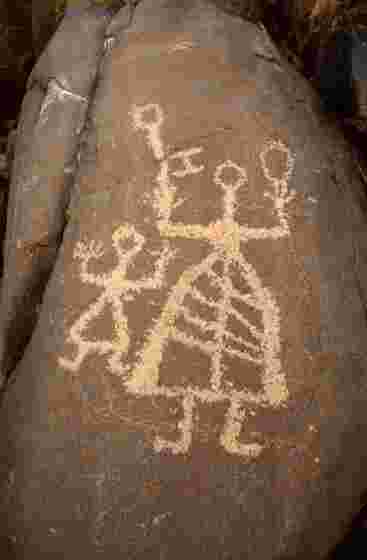 However, others may represent shoulder bags or flat baskets which are used as vessel covers or food trays; both of which are vital items in a nomadic lifestyle. Alternatively, they may represent calabashes. Wodaabe women measure their worldly wealth in calabashes and can acquire many in a lifetime, mostly ornamental to be displayed only on certain ceremonial occasions. If some of these depictions are not necessarily men or warriors then what have been considered shields may in fact represent some other important item of material culture. 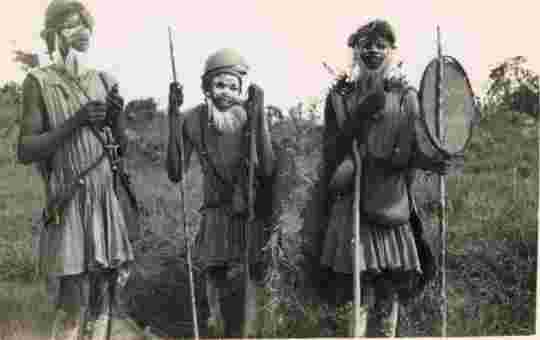 Photograph of three Fulani male children 'dressed up for a ceremonial dance'. They are carrying shoulder-bags and holding sticks, and the male at right has flat basket impaled on stick. Rural setting. Af,B47.19 © Trustees of the British Museum

Engraved figures are often depicted with geometric patterning across their torso which may reflect traditional garments. This armless Wodaabe vest is decorated with abstract geometric combinations; patterns similar to those found on amulets, bags, containers and other artefacts as well as rock art. 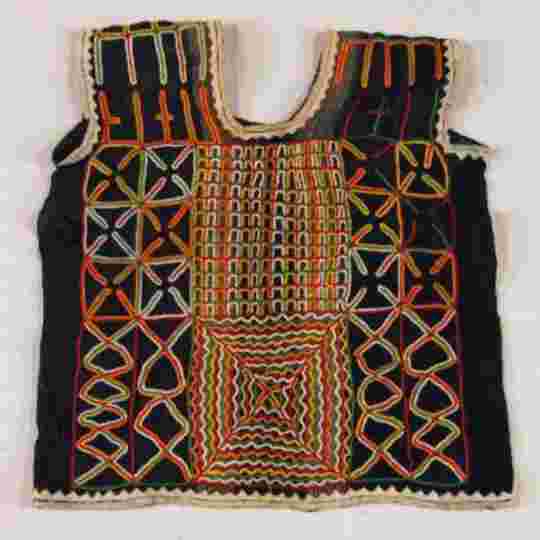 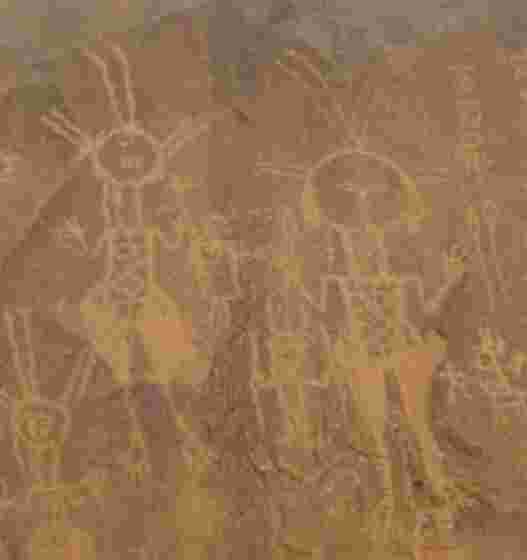 There is also a consensus within Wodaabe society about beauty and ugliness; what makes something beautiful or indeed ugly generally is agreed upon, there is a commonality of taste. This may account for the paradox of why there is individuality within a corpus of images that inherently are comparable (Bovin,2001:16).

As nomads, Wodaabe do not identify themselves by place or territory as such, but a Wodaabe’s body is a repository of culture to mark them out against nature. Culture is not seen as an unessential indulgence but as an imperative necessity, it is part of one’s survival and existence in an inhospitable environment. We may speculate that rock art images may be seen as a way of stamping culture on nature; markers of socialised space. 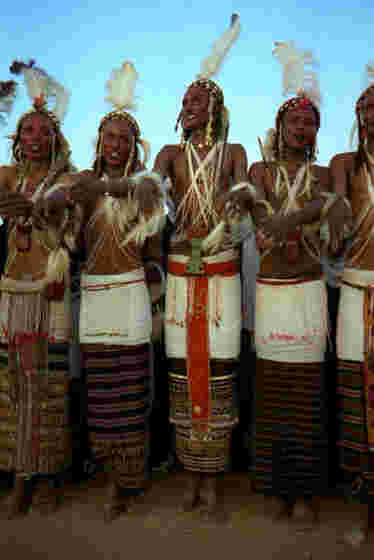 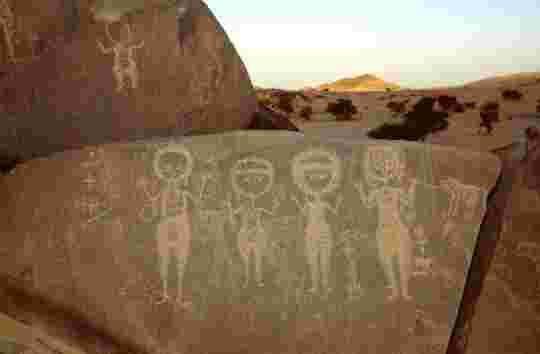 This brief review was motivated, in part, by the underlying problems inherent in the categorisation of visual culture. Historically assigned classifications are not fixed and armed with current knowledge across a range of resources we may provide further insights into these enigmatic representations. Obviously, a much more systematic study of this category known as Libyan-Warrior figures needs to be undertaken to determine their distribution and the similarities and differences between depictions across sites. Additionally, care must be taken making connections with a cultural group whose material culture has changed over the course of the twentieth century. Nevertheless, it seems the category of Libyan-Warrior figures is an area that is ripe for more intensive investigation.