The rock art of eastern Africa is characterised by a wide range of non-figurative images, broadly defined as geometric. Occurring in a number of different patterns or designs, they are thought to have been in existence in this region for thousands of years, although often it is difficult to attribute the art to particular cultural groups. Geometric rock art is difficult to interpret, and designs have been variously associated with sympathetic magic, symbols of climate or fertility and altered states of consciousness (Coulson and Campbell, 2010:220). However, in some cases the motifs painted or engraved on the rock face resemble the same designs used for branding livestock and are intimately related to people’s lives and world views in this region.

First observed in Kenya in the 1970s with the work of Gramly (1975) at Lukenya Hill and Lynch and Robbins (1977) at Namoratung’a, some geometric motifs seen in the rock art of the region were observed to have had their counterparts on the hides of cattle of local communities. Although cattle branding is known to be practised by several Kenyan groups, Gramly concluded that “drawing cattle brands on the walls of rock shelters appears to be confined to the regions formerly inhabited by the Maa-speaking pastoralists or presently occupied by them”†(Gramly, 1977:117). 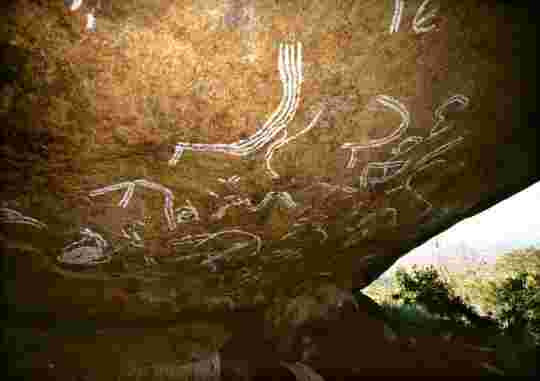 In the case of Lukenya Hill, the rock shelters on whose walls these geometric symbols occur are associated with meat-feasting ceremonies. Meat-feasting shelters exist from northern Tanzania through Kenya to Lake Turkana, and are places where Maa-speaking initiated men, who are not permitted to eat meat in their homes, gather to kill and feast on animals, predominantly cattle. During or after feasting, symbols of the animals that had been eaten were painted on the shelter ceiling in white or less often red. Maa speakers brand their cattle and camels with symbols that signify the lineage of their owners, but may also indicate if an animal has been treated for a particular disease. Different symbols may be used for male and female animals. 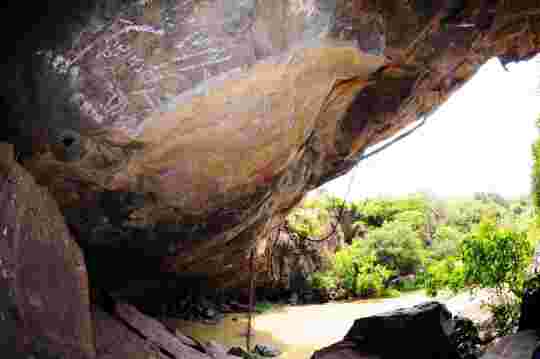 The sites of Namoratung’a near Lake Turkana in northern Kenya showed a similar visible relationship. The southernmost site is well known for its 167 megalithic stones marking male burials on which are engraved hundreds of geometric motifs. Some of these motifs bear a striking resemblance to the brand marks that the Turkana mark on their cattle, camels, donkeys and other livestock in the area, although local people claim no authorship for the funerary engravings (Russell, 2013:4). 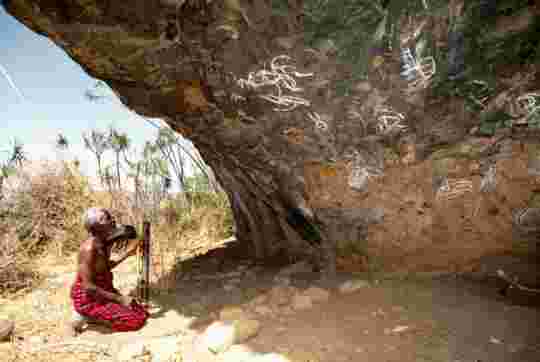 Recent research (Russell, 2013) has shown that at Namoratung’a the branding of animals signifies a sense of belonging rather than a mark of ownership as we understand it in a modern farming context; all livestock, cattle, camel, goats, sheep and donkeys are branded according to species and sex (Russell, 2013:7). Ethnographic accounts document that clan membership can only be determined by observing someone with their livestock (Russell, 2013:9). The symbol itself is not as important as the act of placing it on the animal’s skin, and local people have confirmed that they never mark rock with brand marks. Thus, the geometric motifs on the grave markers may have been borrowed by local Turkana to serve as identity markers, but in a different context. In the Horn of Africa, some geometric rock art is located in the open landscape and on graves. It has been suggested that these too are brand or clan marks, possibly made by camel keeping pastoralists to mark achievement, territory or ownership (Russell, 2013:18). Some nomadic pastoralists, further afield, such as the Tuareg, place their clan marks along the routes they travel, carved onto salt blocks, trees and wells (Mohamed, 1990; Landais, 2001). 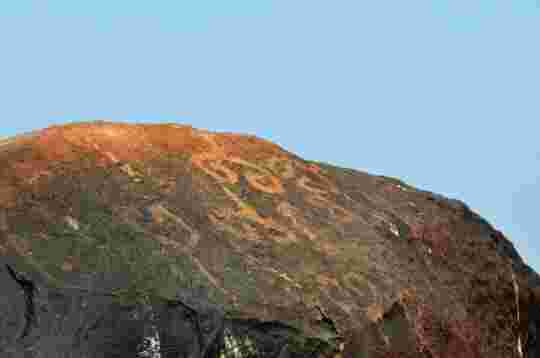 However, not all pastoralist geometric motifs can be associated with meat-feasting or livestock branding; they may have wider symbolism or be symbolic of something else (Russell, 2013:17). For example, informants from the Samburu people reported that while some of the painted motifs found at Samburu meat-feasting shelters were of cattle brands, others represented female headdresses or were made to mark an initiation, and in some Masai shelters there are also clear representations of warriors’ shields. In Uganda, a ceremonial rock in Karamoja, shows a dung painting consisting of large circles bisected by a cross which is said to represent cattle enclosures (Robbins, 1972). Geometric symbols, painted in fat and red ochre, on large phallic-shaped fertility stones on the Mesakin and Korongo Hills in south Sudan indicate the sex of the child to whom prayers are offered (Bell, 1936). A circle bisected by a line or circles bisected by two crosses represent boys. Girls are represented by a cross (drawn diagonally) or a slanting line (like a forward slash)(Russell, 2013: 17).

Although pastoralist geometric motifs are widespread in the rock art of eastern Africa, attempting to find the meaning behind geometric designs is problematic. The examples discussed here demonstrate that motifs can have multiple authors, even in the same location, and that identical symbols can be the products of very different behaviours.

Russell, T. 2013. ‘Through the skin: exploring pastoralist marks and their meanings to understand parts of East African rock art’, in Journal of Social Archaeology 13:1, pp.3-30

† The term Maa relates to a group of closely related Eastern Nilotic languages, which historically dominated the east African hinterland; and today is spoken by around a million people.