The Matobo Hills (also spelled as Matopo or Matopos Hills) are located to the south-west of Zimbabwe, in Matabeleland, one of the two main rock art regions in the country. It is a large region, more than 2000 sq. km, characterized by granite hills separated by nearly parallel valleys where the vegetation consists of scattered woodlands and areas covered by grass with an abundance of wild fruits. The region was occupied since at least the Middle Stone Age, but the human presence increased in the last millennia BC. The region holds an incredible amount of rock art; as many as 3,000 sites have been estimated based on the better surveyed areas. Paintings constitute the vast majority of depictions, although occasional engravings have also been reported. Paintings are usually found in rock shelters and associated with archaeological remains, which show an occupation of the area since the Early Stone Age. 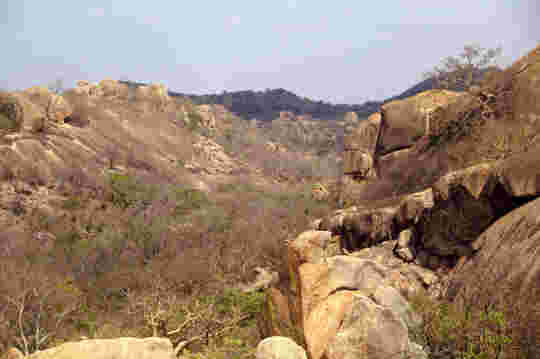 The rock art of the Matobo Hills is as varied as that of the rest of Zimbabwe, mainly consisting of depictions of animals and human figures often grouped in complex scenes, clustered or represented in rows. Human figures are predominant, with males being more numerous than women and children very rare. They are usually depicted in a slender style, facing left or right but with the upper part of the body facing front, and often carrying bows, arrows or other objects. Regarding the animals, mammals dominate, with the kudu antelope being especially numerous although this animal is not commonly found in the Matobo Hills. A wide range of animals such as smaller antelopes, giraffes, zebras, ostriches, monkeys, eland antelope, rhinoceros and to a lesser extent carnivores are also depicted. The animals are represented in very different attitudes and may be depicted standing still, running or lying. Humans and animals are often related in hunting scenes. Along with animals and human figures, a fair number of geometric symbols are present, including a very characteristic type of motif made of a series of narrow oval-like shapes (formlings) usually depicted vertically, and sometimes interpreted as beehives. 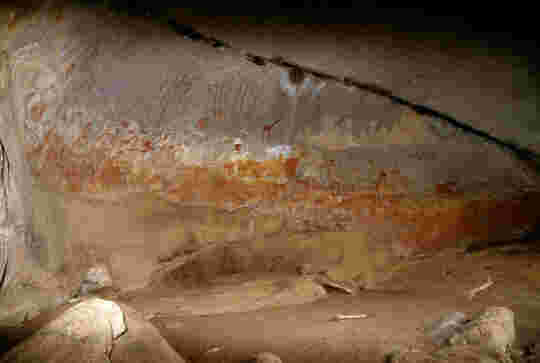 One of the characteristics of the Matobo Hills rock art is the incredible variety of colours used, which includes a wide range of reds, purples, oranges, browns and yellows, as well as black, white and grey tones. Colours are often combined, and in some cases particular colours seem to have been chosen for specific animals. A common feature in some types of animals as giraffes and antelopes is the outline of the figure in red or white, with the body infilled in a different colour. 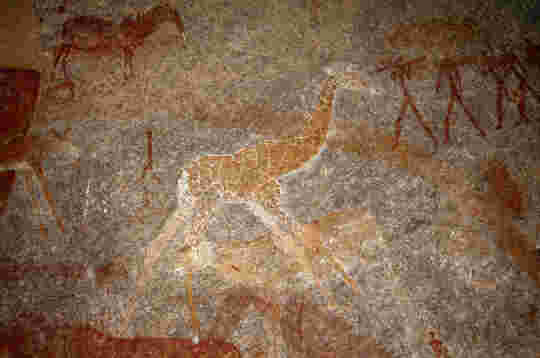 Many of the depictions in the Matobo Hills are associated with hunter-gatherers, providing a great amount of information about the social, economic and spiritual life of these groups. Depictions of daily objects (bows, vessels, digging sticks, cloaks) appear depicted in the rock art, and humans are shown hunting animals, fighting other groups and dancing in what seem to be ritual scenes. In fact, many of the scenes show strong similarities to those found in the Drakensberg (South Africa), and part of the iconography in the Zimbabwean paintings – ‘therianthropes’ (part-human, part-animal figures), elongated figures, rain animals, geometric figures – can be easily related to trance or rain-making activities similar to those seen in South Africa. These paintings have been interpreted as representing the trance experiences of shamans (the term ‘shaman’ is derived from Siberian concepts of Shamanism and its applicability to San|Bushman¹ cultures has been questioned, but it is utilised here on the understanding that it sufficiently represents trancers in this academic context, where it is the most frequently used term to describe them). However, unlike in South Africa, the Matobo Hills rock art is not recent and researchers lack the key ethnographic records that help us to interpret the paintings. Therefore, interpretations cannot be directly extrapolated from the South African paintings to those of the Matobo Hills, and researchers such as Peter Garlake have broadened the interpretative framework of this art to include social issues in addition to the religious. 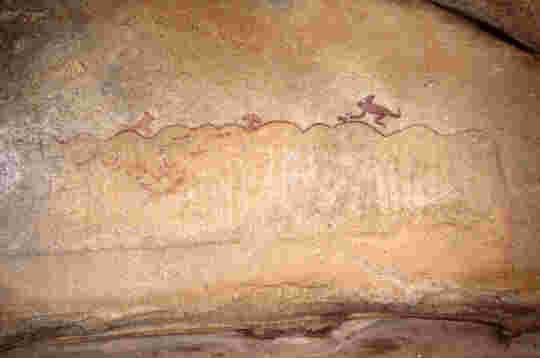 Not all the paintings in the Matobo Hills can be ascribed to groups of hunter gatherers, though. Although fewer, there are some paintings that correspond to a later period which were made by Iron Age farmers. Unlike in South Africa, rock art does not show evidence of interaction between these two groups, and it is probable that the hunter-gatherers that inhabited the area were either displaced or absorbed by these new farmer communities. However, some of the later paintings show some links with the previous hunter-gatherers traditions. This later art consists mainly of schematic figures (usually animals, including domestic ones such as goats and cows) and geometric symbols, mostly depicted in white but also red or black and smeared with the hand or the fingers. 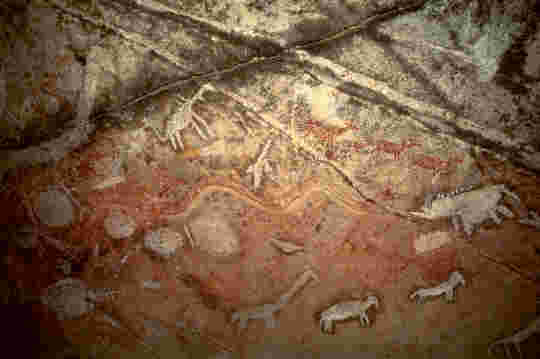 The Matobo Hills constitute a perfect example of how nature and human presence can become imbricated, to create a living landscape in which every hill is recognized individually and many of them are still venerated by the communities living in the area. Undoubtedly, rock art played a significant role in this process of progressive sacralisation of the landscape. The importance of the thousands of sites scattered throughout the hills is an invaluable testimony of the strong spirituality of hunter-gatherers that created it, and their deep relation to the land in which they lived. 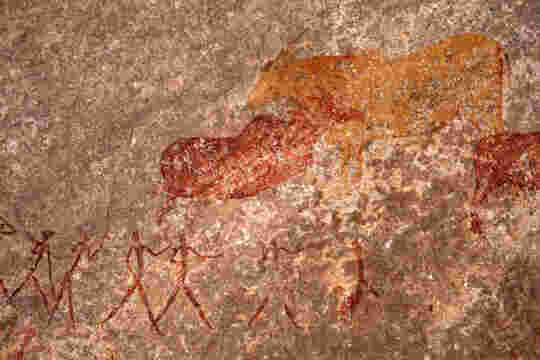