First documented in 1913 (in the Teso Report†), the geometric paintings at Nyero are among the most important and well documented rock art sites in Uganda, and are on the Tentative list of UNESCO World Heritage sites‡.

Nyero is located in eastern Uganda in the Kumi District, about 200 km from the capital city Kampala. It comprises six rock shelters in total, but initially only three were recorded and referred to as shrines by local communities, who had no knowledge of the origins of the paintings. The authorship of the paintings remains in some debate.

Initially, the rock art was thought to be the work of San|Bushmen of southern Africa. However, archaeological, genetic and ethnographic evidence has subsequently attributed the paintings to the ancestors of Batwa people, hunter-gatherers who are descendants of ancient aboriginal groups once spread across East and Central Africa and most probably the original inhabitants of this landscape. Today they live in small groups near the Rwanda/Uganda border. 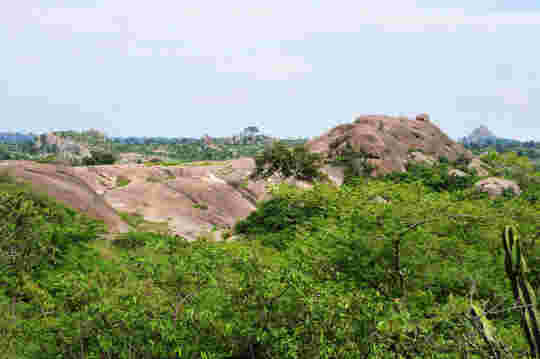 More recent studies have proposed that the rock art was the work of settled human groups and not early hunter-gatherers. It has been proposed that rock shelters were used by semi-nomadic peoples devoted to animal herding, and used as reference points in the landscape. Generally positioned away from flat land, they may have served to direct herders of cattle and/or goats towards paths and water. The unknown identity of the rock artists makes dating problematic, but some of the paintings may be up to 12,000 years old.
Notwithstanding the problems associated with attribution and chronology, many of the rock paintings in Uganda show serious damage due to long exposure to the elements. At Nyero 2, the paintings are partially covered with mineral salts, while at Nyero 5 the paintings have been destroyed or are obscured by rain wash-off. The physical condition of the paintings is testament to their antiquity. 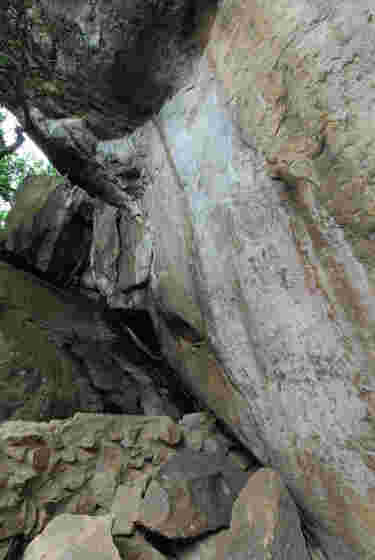 Nyero 1
This is a small rock shelter on the outer edge of the outcrop and comprises six sets of concentric circles with a central image of a ‘floral motif’ and a so-called ‘acacia pod’ shape. The geometrics in this shelter are all painted in white.

Nyero 2
This is the main shelter, the overhang of which is formed by an enormous boulder (estimated to weigh at least 20,000 tons) which has broken away; a vertical rock against the back wall measures 10m in height. The panel at Nyero 2 consists of more than forty images such as vertical divided sausage shapes, so-called ‘canoes‘, unidentified faint markings, ‘U’ shapes, lines and dots, with evidence of superimposition; but is dominated by concentric circles. A unique feature of the paintings are the so-called ‘canoes’ or parts of ‘canoes’, so-called because of their resemblance in form. The depictions are all painted in shades of red. 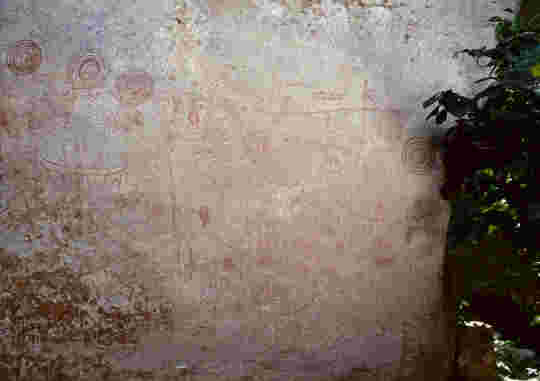 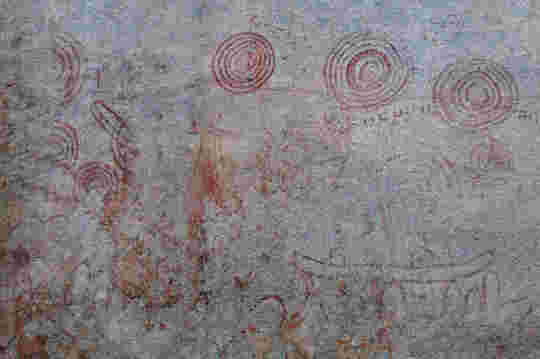 The paintings are protected from direct rain by the overhang and rocks to the front and sides protect the paintings from the sun, which is likely to have contributed to their preservation. Early users of the shelter placed ritual gifts on its south-eastern side; the tradition of using this space to place money either before or after receiving help from ancestral spirits is continued by the local community.
As well as the rock art, a bone incised with three concentric circles and four parallel lines, and pieces of prepared ochre were excavated from this site in 1945. These are the only evidence of prehistoric portable art so far found in Uganda.

Nyero 3
Located about eight minutes’ walk from Nyero 2, this shelter is formed by a large boulder perched on supporting rocks. Paintings consist of white concentric circles; the outer circles surrounded by double curved designs, between which are double lines divided into small compartments. 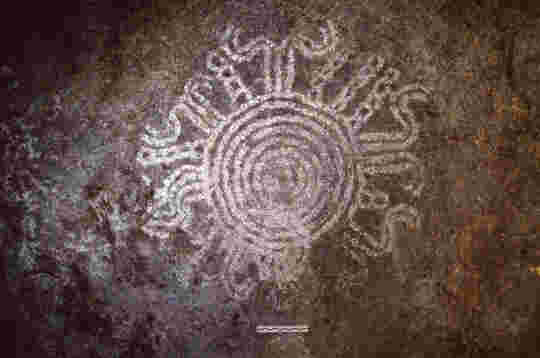 Nyero 4
This is a small shelter on the south-western side of the hill where there are a few traces of red finger-painted concentric circles, two conical shapes and lines.

Nyero 5
Situated on the western side of the hill, this shelter has a red geometric motif composed of a combination of circular and linear shapes made with both a brush and a finger. However, the images are quite difficult to distinguish as they are damaged by natural water erosion. 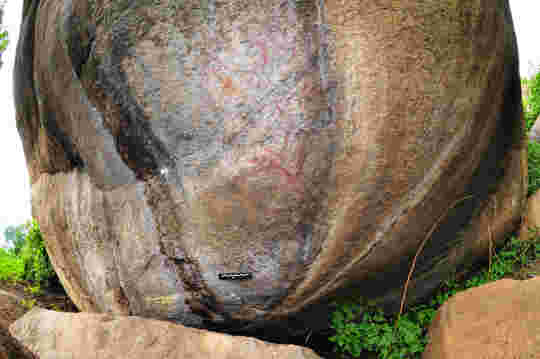 Nyero 6
Situated on the top of the hill, this shelter has a good view of the landscape. This site features two red finger-painted outlines of small oval shapes and a slanting L-shape as well as an outlined cross with a small circle below. The painted surface is now subject to severe exfoliation as it is open to the rain and morning sun.

The sites at Nyero are believed locally to have been sacred ancestral places where, in the past, people would have travelled long distances to make offerings of food, beer and money in times of drought, misfortune and for child birth. Nyero was also regarded as a magical place where rain ceremonies were held. Oral histories have recorded strong attachments to the site and individual and community prayers were held seasonally. The antiquity of the images and their association with long-forgotten peoples may serve to enhance Nyero as a special and sacred place for local communities.