The Ikom Monoliths, originally consisting of around 400-450 engraved standing stones and distributed around thirty communities in the Ikom area of Cross River State, Nigeria, are thought to be up to 1500 years old. In more recent years, threatened by fire, theft, vandalism and neglect, there are now estimated to be less than 250. 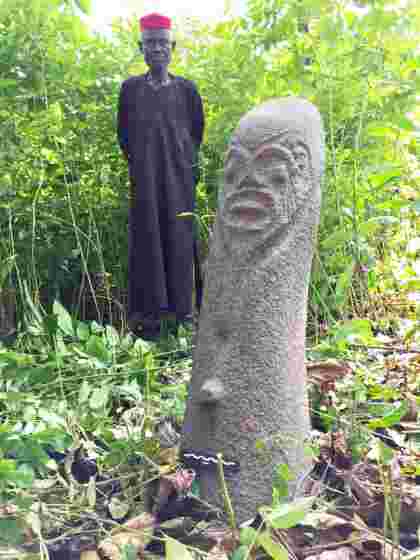 Monolith from Nnaborakpa with village elder standing in the background. 2013,2034.24046 © David Coulson/TARA

The majority of the stones are skilfully carved in hard, medium-textured basaltic rock, with a few carved in sandstone and shelly limestone. Varying in height from 0.91-1.83m (3-6 feet) and sculpted into a phallus-shape, the stones share common decorative features. They depict stylised human features comprising two eyes, an open mouth, a head crowned with rings, a pointed beard, an elaborately marked navel, two hands with five fingers, a nose and a variety of facial markings. Emphasis is placed on the head while the rest of the body tapers into the base of the phallus’ shaped monolith, with limbs and legs suggested. They are also linearly inscribed with complex geometric motifs, which have been compared to the rock arts of Tanzania in that the meanings of the symbols are known to only the artists (UNESCO, 2007). 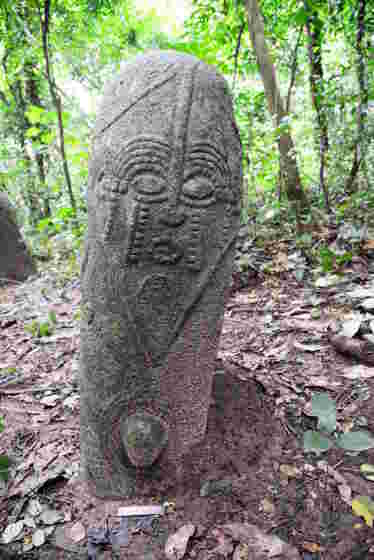 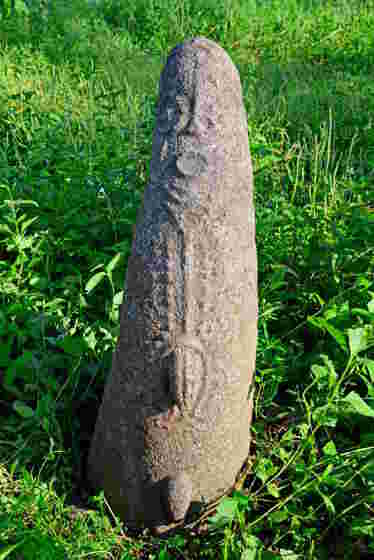 The effects of weathering has resulted in erosion and deterioration, and as such in 2007 were added to the World Monuments Fund’s list of sites in danger and are being considered for inclusion into UNESCO’s World Heritage Site list. Furthermore, it is estimated that the total numbers of monoliths is now thought to be less than 250, with many having been distributed among major museums throughout the world. 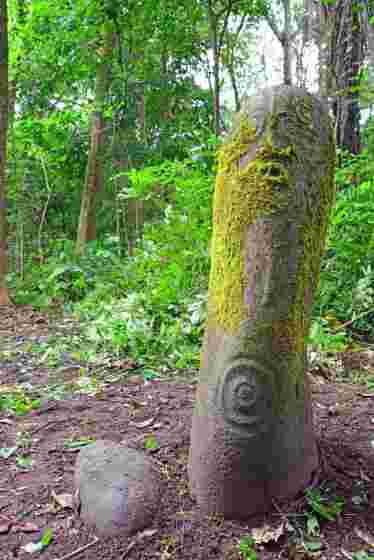 Moss and lichen growing on one of the monoliths occluding facial feaures, Nikirigom. 2013,2034.24103 © David Coulson/TARA 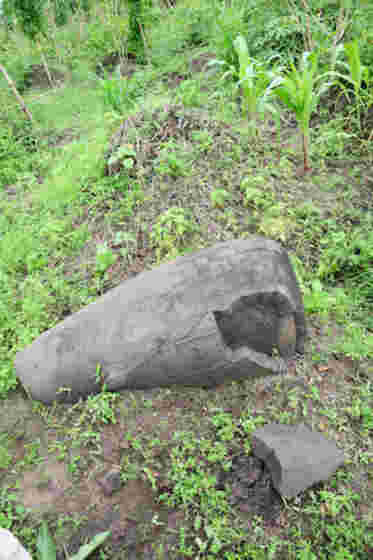 Known as Akwasnshi or Atal among the local Ejagham people of Cross River, the monoliths can be found in the centre of the village or in the central meeting place of the village elders, but also in the uncultivated forest outside the villages. In each village in which they are found, the upright stones are positioned in circles, sometimes perfect circles, facing each other. Some are slightly carved as very low reliefs, while others are inscribed engravings. 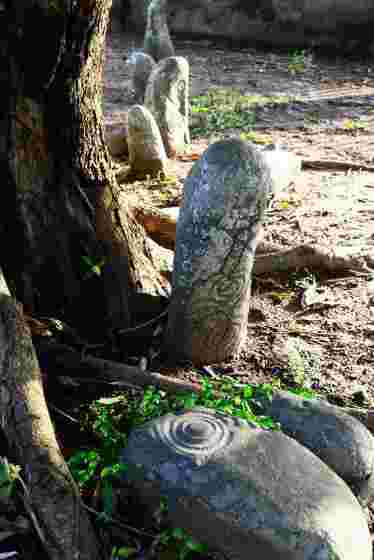 Whilst the stones seem to share common features, each monolith is unique in its design and execution, and are thought to “bear a complex codified iconography and an ancient writing, communication and graphic system composed in a complex traditional design configuration” (UNESCO 2007).

Local ethnographies about the Ikom monoliths are based in oral traditions and as such there are numerous meanings associated with the stones. For example, stone circles are used as places of sacrifice and community meeting places. They were created as memorials of departed heroes or beloved family members and represent powerful ancestral spirits to whom offerings are still made (Esu and Ukata, 2012:112). In addition local community leaders also ascribed religious significance of the stones whereby particular stone are dedicated to the god of harvest, the god of fertility and the god of war (Esu and Ukata, 2012:113).

The local communities in the area value the monoliths in their traditional practices, beliefs and rituals, such as being ceremonially painted at the time of the Yam festival. 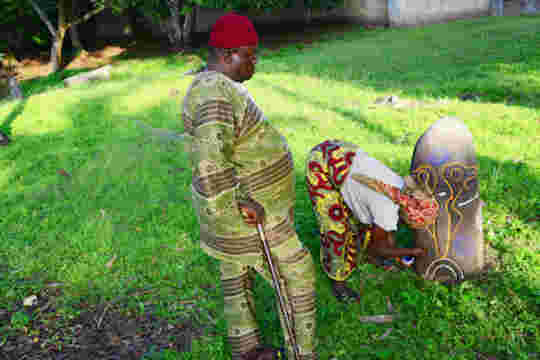 Monoith being opainted in orange, blue and white by local woman. Standing to the left is Chief Silvanus Akong of Alok village. 2013,2034.23952 © David Coulson/TARA

Recent criticism has focused on ways in which scholars have situated these sculptural forms within Western/European anthropological and archaeological discourse that has reduced them to “mere artefacts and monuments” rather than attending to their “artistic attributes, content and context” (Akpang, 2014:67-68).