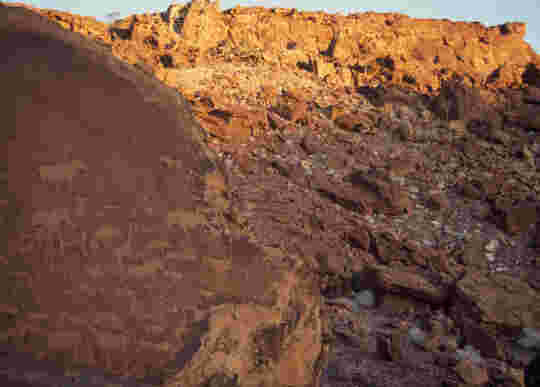 The engravings are found in several loose conglomerations, on sandstone surfaces at the base of a hill scarp within the basin of the ephemeral Huab River, while the few painted panels in the area are found on the underside of sandstone rock overhangs. The engraved images are pecked and/or ground/polished and are made in a variety of styles, with ubiquitous geometric patterns of cross-hatched, looped and linear forms, as well as circles and polished depressions and cupules. In addition there are numerous depictions of animals, ranging in style from more naturalistic to stylised and distorted. Chief among the animal images is the giraffe, which is most numerous. Also common are images of rhinoceroses, zebra, gemsbok antelope and ostriches. There are occasional depictions of cattle but images of human beings are almost absent. Also featured are images of human footprints and animal spoor (hoof and paw prints). 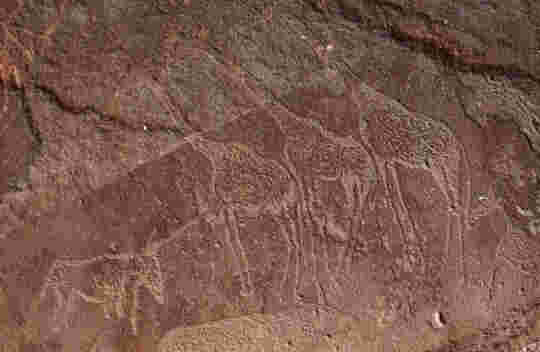 The figurative images in the engraved art feature several different distinct styles, ranging from very naturalistic outlines of animals such as giraffes and rhinoceroses, through carefully delineated but stylised or distorted renditions of these animals with exaggerated extremities, to very schematic pecked outlines. One particular aspect of style is a form of relief engraving, whereby in some deeply pecked figures’ muscle masses are delineated. In others, the infill pecking is graded and sparser in the centre of a figure, giving the impression of shading. A few of the engravings are highly polished. Perhaps most renowned among these is the “dancing kudu” image, a stylised image of a kudu antelope cow rendered atop a flat slab of rock and surrounded by geometric shapes. 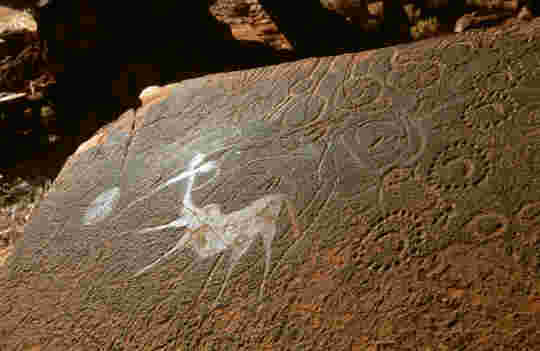 It appears that the kudu figure is pregnant and it has been suggested that the choice of this animal may have been made in relation to female initiation practices. This is because the female kudu has a symbolic importance relating to women’s behaviour in the cosmology of some San|Bushman¹ people, traditionally hunter-gatherer people whose ancestors are thought to have made most of southern Africa’s rock paintings and engravings. Other animals known to have symbolic and metaphorical significance to San|Bushman people are also depicted here (giraffe images are most numerous) and these images have been interpreted in the vein of other southern African rock art sites, where images are thought to reflect the experiences of shamans while in a trance state, and may have multiple metaphorical and other cultural meanings.

The engravings were certainly made in strategic locations and not simply on any available rock surface, with some images having been deliberately made in places that are difficult to reach and to see. The reason for this is unclear, though it has been suggested that such placement might be in relation to the images serving a preparatory function for shamans preparing to enter a trance. Some of the engravings have exaggerated features such as elongated limbs and extremities which may reflect trance experience. One of the engravings appears to depict a lion with pugmarks (paw prints) instead of feet and third at the end of the tail. Each of those in the feet have five instead of the correct four pads and this has been interpreted as meaning that the figure represents a human shaman in trance who has taken on lion form. A similar suggestion has been made regarding the frequent depictions of ostriches (Kinahan, 2006). 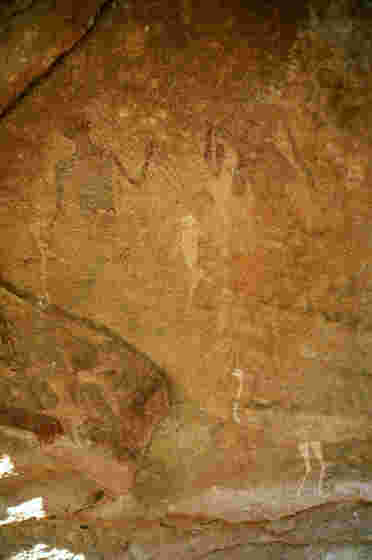 Such interpretations are made on the basis that the artists followed the same cultural tradition as the ancestral San|Bushman. The few examples of painted rock art at the site certainly appear to conform to the hunter-gatherer tradition found elsewhere in Namibia. Following this approach, the geometric engraved forms may be interpreted as illustrative of so-called ‘entoptic’ phenomena: shapes and patterns observed when entering a trance state, though an alternative origin for some of the geometrics with particular line and circle motifs has also been suggested. This proposal suggests that they were made by ancestral Khoenkhoen herder people, rather than hunter-gatherers, perhaps in relation to initiation practices.

Attempting to date or sequence the images based on superimpositioning or patina is difficult – superimposition of engravings at the site is rare and a range of patination colours seem to indicate these works having been created over a wide timescale, though it has been noted that a certain style of spoor images sometimes overlie some of the animal figures, indicating that this is a younger tradition. Archaeological fieldwork around the site undertaken in 1968 by Erich Wendt recovered evidence of occupation including stone tools, worked ostrich eggshell and stone structures. The dates recovered from radiocarbon dating ranged widely from c.5,850-180 BP (years before present). The relationship between periods of occupation/site use and the production of rock art is not known, but based on archaeological evidence from around the wider area it is thought that engravings in the styles found at Twyfelfontein range from around 6,000 to around 1,000 years old, though some may be more recent. 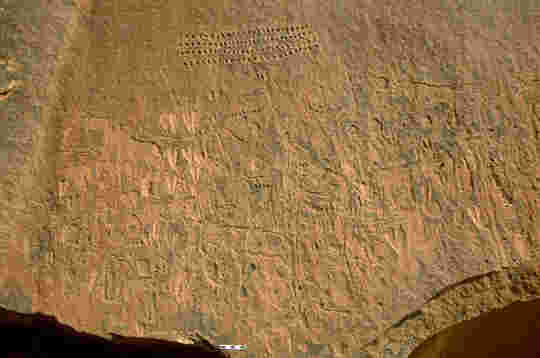 Engraved panel showing the figures of giraffe and other animals, rows of dots, hoof prints and hand prints showing the range of juxtapositioning and superimposition at the site. Twyfelfontein | /Ui-//aes, Namibia. 2013,2034.22143 © TARA/David Coulson