Tsodilo Hills, located in north-west Botswana, contains around 400 rock art sites with more than 4,000 individual paintings, and has been termed the “The Louvre of the Desert”. Designated a World Heritage Site by UNESCO in 2001, Tsodilo comprises four main hill: Male Hill, Female Hill, Child Hill and North Hill with paintings occurring on all four. This region shows human occupation going back 100,000 years. At sunset the western cliffs of the Hills radiate a glowing light that can be seen for miles around, for which the local Juc’hoansi call them the “Copper Bracelet of the Evening”. 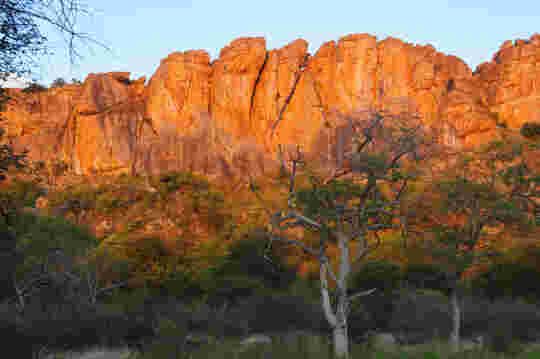 The evening light falls on the cliffs of Female Hill causing them to glow like burnished copper, and giving the Hills the name 'Copper Bracelet of the Evening'. 2013,2034.21153 © TARA/ David Coulson

The paintings at Tsodilo are unique in comparison to other San|Bushmen rock art in both techniques and subject matter. San|Bushmen paintings are well-known throughout southern Africa for their fine-line detail because they were brush painted, but those at Tsodilo are finger painted. In addition, 160 depictions of cattle are portrayed in the same style as wild animals, and more geometric designs appear here than anywhere else. Tsodilo animal drawings are larger and the geometric designs simpler than those found elsewhere. In comparison to human figures elsewhere in southern Africa, those at Tsodilo appear without bows and arrows, clothing or any forms of personal ornamentation. In addition, numerous cupules and grooves are incised and ground into rock surfaces, sometimes close to painted rock art sites and some on their own. For the residents of Tsodilo, the hills are a sacred place inhabited by spirits of the ancestors.

The subject matter of red finger-painted depictions can be divided into animals, human figures and geometric designs. Unusually, animals, mainly large mammals and cattle have been depicted in twisted perspective with two horns and two or four legs displayed in silhouette. 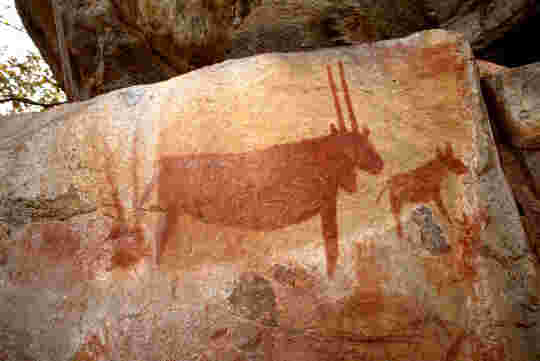 Human figures are schematic and depicted by two intersecting lines, a vertical line which thickens at the middle to indicate hips and buttocks, and the other a horizontal shorter line joined at the middle to represent a penis. Female figures are depicted with two legs and show two projections near the top indicating breasts. 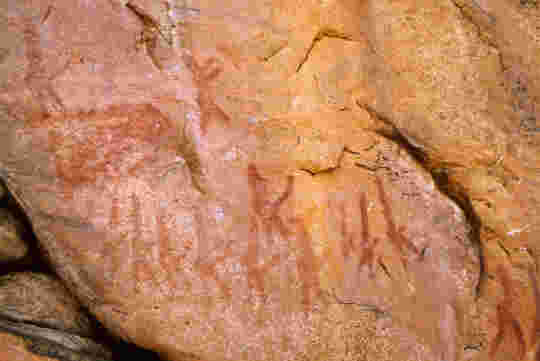 This panel of figures shows men with penises and women with breasts appearing to perform a ceremony with a domestic cow. Female Hill, Tsodilo Hills. 2013,2034.20891 © TARA/ David Coulson

Geometric designs include circles and ovals with internal grid patterns, rectilinear motifs termed “shields”, some handprints and rows of finger impressions. In addition, there are a number of rectangular motifs that have been called “stretched skins”. Similar designs have been found in Zambia, Angola, Namibia, northern South Africa and Malawi. 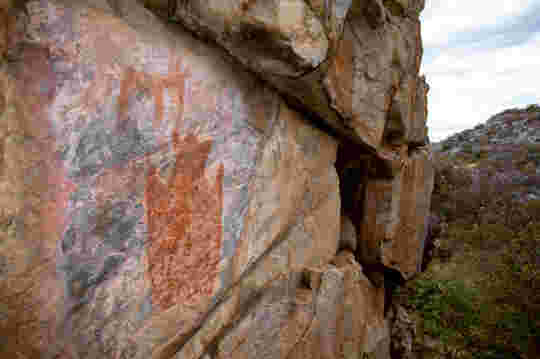 While most of the images in the Tsodilo Hills seem to be discrete depictions, some sites show figures. Some of these figures are with cattle as well as women standing in rows in connection with animal groups, possibly showing some relationship with each other. Additionally, some of the rock art in the Tsodilo Hills shows superimposition, but this occurs infrequently. In some cases red geometric designs superimpose animals, but geometric designs and animals never superimpose human figures, nor do images of cattle ever superimpose other images – which may suggest some kind of relationship or hierarchy.

White finger-painted images appear more crudely executed and are made from a powdery or greasy white pigment. More than 200 paintings at 20 different sites show paintings in this style, half of these depictions occur in White Paintings Shelter alone. Subject matter includes people facing forwards with their hands on hips, figures riding horses, a possible wagon wheel and a figure standing on a wagon, as well as an elephant, rhino, giraffe, eland, cows, antelope, snakes, unidentified animals and geometric designs, particularly “m” shapes. White paintings occur at sites with red paintings and often superimpose them. 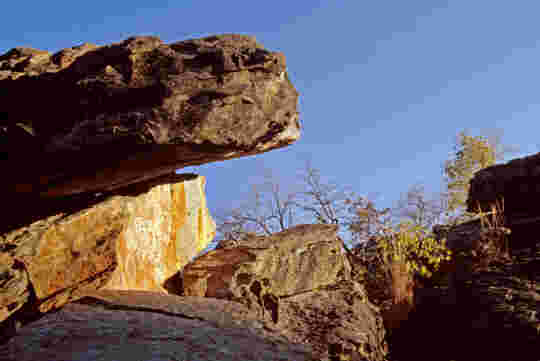 There are no engravings at Tsodilo representing animals or human figures, but more than 25 sites show evidence of small round depressions ground into the rock, known as cupules, as well as various shaped grooves that have been chipped and ground into the rock. The majority of sites are found on Female Hill, with four on Male Hill and one site on Child Hill. Cupules tend to measure about 5cm or more wide and less than a 1cm deep, although larger examples occur. They can occur at painted rock art sites but also on their own. For the most part they are found in groups ranging from 5 to 100 and in three cases, considerably more. For example, in Rhino Cave there are 346 carved into a vertical wall and nearly 1,100 at Depression Shelter. The purpose or meaning of cupules is unknown; they may have denoted a special place or the number of times a site had been visited. However, we have no dates for any of the cupules and even if they are adjacent to a rock art site, they are not necessarily contemporaneous. From their patina and general wear it has been proposed that some cupules may date back tens of thousands of years to the Middle Stone Age. If paintings also existed at this time they have long since disappeared. 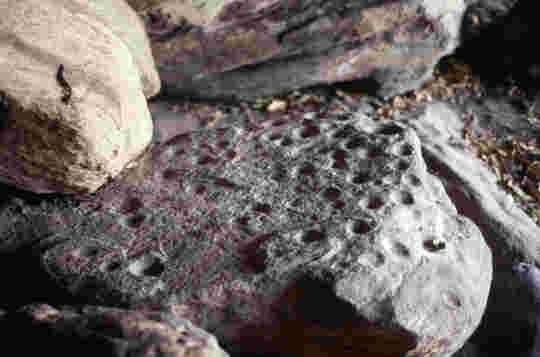 Grooves are less common than cupules, but are often easier to detect. They occur in small groups of 3 to 15 and are elongated oval or canoe-like in shape, and are found mostly on horizontal or near-horizontal surfaces. Their function is unknown, although a thin slab of stone with a curved round edge was excavated from Depression Shelter which matched one of the grooves in the shelter.

Who were the artists?

It is a bit of a mystery about who actually created the paintings at Tsodilo, as the red images at Tsodilo do not fit neatly into other known styles of rock art in southern Africa. They do not show the fine brush work of San|Bushmen¹ in other parts of southern Africa, nor the cruder style of white paintings attributed to later Bantu-speaking farmers.

It is possible that they were painted by the Khoesan during the first millennium AD, the original settlers in the area who made stone tools and herded livestock. A local Ncaekhoe man (a Central San people) claims his ancestors made the paintings and it is possible that some or many of the cattle images were painted by pastoral ancestors of Ncaekhoe.

The white paintings are more difficult to attribute authorship, although as they are comparable to the red paintings, comprising the same subject matter of elephant, rhino, giraffe and antelope as well as geometrics, they may reflect a later version of the red tradition.

The paintings at Tsodilo are often faded because they are located on rock faces exposed to the sun, wind and rain. As such, dating them scientifically is problematic as little or no suitable organic material remains. However, cattle paintings may help to date the art. There are about 160 depictions of cattle, which were common around the Tsodilo Hills between 800–1200 AD. As the cattle depictions are stylistically similar to other animal depictions it has been suggested that this seems to be a plausible date for most of the art (Coulson and Campbell, 2001:103) 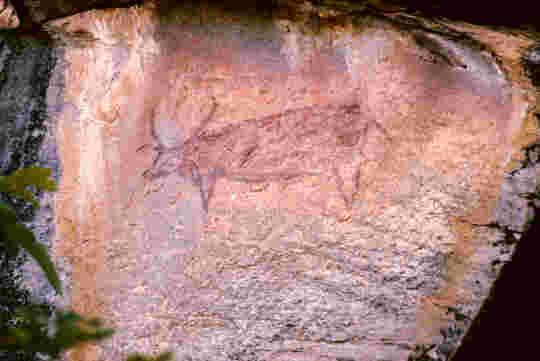 Similarly, the first horses known to reach Tsodilo belonged to a party of Griqua traders who passed nearby on their way to Andara in 1852, the earliest probable date for the paintings of figures on horseback (Campbell, Robbins and Taylor, 2010:103). It is not clear when the red painting tradition ceased but this could have occurred in the twelfth century when Tsodilo stopped being a major trade centre and seemingly the local cattle population collapsed. 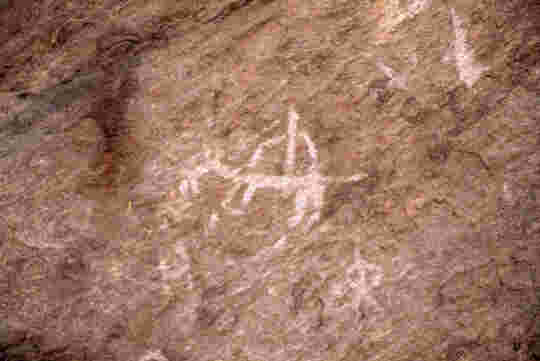 Giraffe, eland and rhino are by far the most common species depicted at Tsodilo, followed by elephant, gemsbok and cattle. However, these images tend to be discretely rendered and there does not appear to be any relationship between images on the same rock.

Representations of people are simply painted and generally stick-like, identified to gender by either penis or breasts. In some cases this may represent sexual virility and fertility, although in scenes where both occur it may merely indicate gender differences.

Cattle seem to appear in the rock art at the same time as human figures. In one scene, three figures, one leading a child, has been interpreted as either herding or stealing cattle (Campbell, Robbins and Taylor, 2010:106). Three other sites show cattle depicted with what may be mythical rain animals. 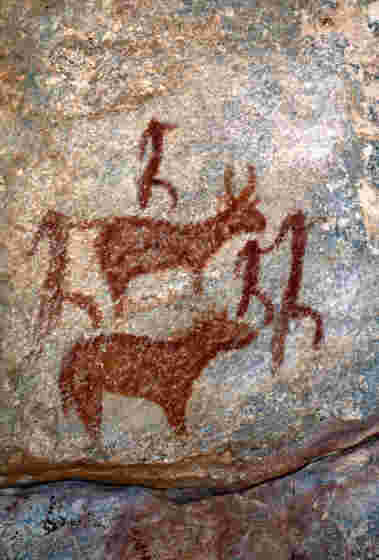 Two cattle with four figures, one leading a child. The scene has been interpreted as possibly herding or stealing cattle. 2013,2034.20996 © TARA/ David Coulson

Geometric designs are trickier to decipher. Square geometric designs, also known as “shields” possibly represent human forms. Circular designs sometimes partially superimpose an animal or be placed within its outline. This superimposition may enhance the symbolic meaning of the animal.

Either singly or in groups, and sometimes depicted with animals or people, geometric motifs show stylistic consistency across a wide area and are likely to have had some symbolic meaning. In Zambia, geometric designs are thought to have been made by women and associated with the weather and fertility, while depictions of animals were made by men. The geometric rock art of Tsodilo fits into a pattern of similar imagery in central Africa and may be related to the same meanings of weather and fertility.